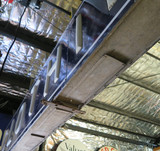 Measuring 3.76m x 63cm high x 23cm deep, this monumental milk or opal glass sign is more than just a statement piece, it's a fully functional work of art and a standout piece of retail signage history. You could build your store around this display piece.
Made by the Federal Electric Sign Company of Kansas city. These unique electrically illuminated signs were first patented in 1903 by inventor and company proprietor J. H. Goehst, this would date to the 1920s. The formula for producing these illuminated signs was brilliant: each letter was pre-made and could be applied to any word as needed so any sign or any size was possible. The letters are original only one in the past has been damaged and reglued the letter C.
This piece ships by Truck delivery. Upon placing your order you will be contacted by a customer service associate to discuss delivery time and details as they pertain to this one of a kind item. Delivery charges will apply.

During this time, Federal Electric came under the ownership of Commonwealth Edison eventually becoming a part of the utility empire of Samuel Insull.

By the 1950s, they began manufacturing fire/air raid sirens, including the Thunderbolt and the Model 5, usually used for warning of air raids or fallout during the Cold War. Longtime engineer Earl Gosswiller patented the Beacon-Ray and TwinSonic products, which set the standard for emergency vehicle lightbars.

In 1956, the company became a corporation, renaming itself "Federal Sign and Signal Corporation". By this time, it made outdoor warning sirens, police sirens, fire alarms, and outdoor lighting.

By 1961, Federal Sign and Signal had gone public, trading on the NASDAQ market. In 1976, the company became Federal Signal Corporation. By 1990, the company began to drop many of its older outdoor warning siren products (e.g. the Thunderbolt, SD-10, Model 5 & 7, etc.) and focused on designing and producing newer products. In 1988, it released a new product: the Federal Signal 2001 series warning siren. This siren is capable of running via a direct current (DC) power source, such as an AC-to-DC inverter, solar energy, and 4 12VDC series-connected batteries at 48 volts DC. Today, the company produces the battery-operated 2001-130, a mechanical siren which is rated at 130 decibels at 100 feet (30 m).

$7,900
RARE American porcelain sign, VERY hard to get in Australia particularly in this size & incredible condition, see photo's for condition. This sign has continued to increase in value over the last...
Add to Basket
Add to Basket