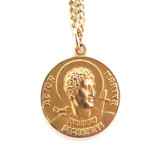 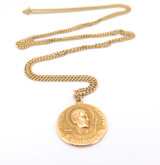 Solid 14 carat yellow gold medallion pendant with St Genesius depicted on the front.  St Genesius was a leader of a theatrical troupe during the reign of Roman emperor Diocletian.  During a performance meant to ridicule Christian rites, he pretended to receive the Sacrament of Baptism.  During the performance he fell ill on stage and two actors dressed as a priest and exorcist were called on stage, to actually baptise him and take away all the weight on his chest.  It was claimed he had a vision of angels directing him and he embraced Christianity.  The emperor was enraged and demanded he renounce his new found faith but he refused was imprisoned, tortured and eventually beheaded.  His remains became relics and he became the patron saint of actors, the veneration of St Genesius continues today.  There is a shrine to St Genesius in Saint Malachy a Roman Catholic church in the New York City Borough of of Manhattan.  The shrine serves as a spiritual landmark for the cities acting community and sufferers of epilepsy.
This ready to wear piece features an extra long gold chain measuring 83 cm that would just go straight over your head.  No fiddling with clasps.  The stamps to the rear are 14k and the makers mark which looks like CM).
Dimensions are as follows:
Diameter of pendant 20.9 mm
Length of chain 83 cm
Weight 14.23 grams
Reviews

$1,200
This adorable solid gold stylised elephant slider pendant is just gorgeous, so cute and animated.  The ears part to allow the chain to go through then carefully position the chain into the...
Add to Basket
Add to Basket

$399
Figure has a Buddha like appearance and is lightly carved. Measures 40mm high ex the loop x 15mm wide at the base & weighs approx 4.8 grams. Stamped 14k twice to the rear, no makers mark. The...
Add to Basket
Add to Basket

$899
Beautifully made 14 carat yellow gold shell pendant / brooch with a pretty pearl centrepiece. The shell has linear lines radiating outwards to one side and a smooth finish to the rear. The...
Add to Basket
Add to Basket