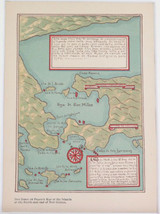 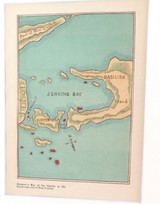 
George Alphonse Collingridge de Tourcey (1847-1931), artist and historian, was born on 29 October 1847 at Goddington Manor, near Bicester, Oxfordshire, England, son of William Collingridge, and his wife Louisa, née Maguire. He rarely used 'de Tourcey'. His parents moved to France in 1853 and he was educated at the Jesuit College, Vaugirard, and the Académie des Beaux-Arts, Paris, studying architecture under Viollet-le-Duc, wood-engraving and painting. Corot informally accepted him as a pupil, a very rare favour.


On the advice of his brother Arthur (1853-1907), also an artist, who was already in Australia, Collingridge migrated in 1879 to join the Illustrated Sydney News, in which he published the first picture of Jenolan Caves (1881), from Arthur's drawing; he also worked for the Australian Town and Country Journal and the Sydney Mail. He very quickly made his mark, gaining the first prize for xylography at the Sydney International Exhibition in 1879; his view of Bathurst in 1880 was thought to be the largest wood-engraving yet produced. Dissatisfaction with lay control of the existing New South Wales Academy of Art led the brothers to found the (Royal) Art Society of New South Wales in July 1880, and in 1888 they launched the short-lived Australian Art, the first such journal in the continent. Both brothers taught in schools and technical colleges-George, who wrote a manual Form and Colour, at Sydney Technical College.


By 1895 he had settled at Jave-la Grande, Hornsby, where he published, irregularly, a journal called Progress, which combined real estate boosting for the new northern suburbs of Sydney with articles on Australian maritime discovery.


This latter theme became an over-riding passion, and between 1890 and 1925 Collingridge devoted two books and some thirty articles to establishing Portuguese priority. He based himself largely, but far from solely, on the maps produced at Dieppe between 1536 and 1566 showing a large land mass, Jave-la Grande, in the right latitudes for Australia, but wrong longitudes. Collingridge's magnum opus is The Discovery of Australia (Sydney, 1895); the smaller First Discovery of Australia and New Guinea (Sydney, 1906) was designed for New South Wales schools but, owing to a change in administration, not adopted. He amassed formidable documentation, especially cartographic, in support of his thesis that the Portuguese had charted all but the south coast of Australia before 1530, and he put forward his views with great vigour and ingenuity; his skill as a draughtsman provided sometimes quaint illustrations to a lively if not always well-organized presentation. The analysis of the nomenclature on the Dieppe maps is thorough and acute, and since his work hardly any serious student, even amongst those who discount the evidential value of the maps, has disputed their Portuguese origins. On the other hand, his enthusiasm led him too often into special pleading, even into gratuitous attempts to discredit undoubted Dutch discoveries, and such extravagances must have contributed to his failure to obtain general acceptance. Nevertheless, it is now increasingly recognized that the cartographical core of his argument deserves more serious consideration than it received from orthodox Australian historians. He was a prophet not without honours in countries other than his own: Knight Commander of the Portuguese Order of St James of the Sword (1908) and the Spanish Royal American Order of Isabella the Catholic (1917). In 1909 he was made the first honorary member of the (Royal) Australian Historical Society.


Collingridge died on 1 June 1931 and was buried in the Catholic section of the Field of Mars cemetery. He was survived by three sons and one daughter.

His talents were doubtless dissipated through a lack of rigour and by the pressures of work for a living on a falling market; but he deserves respect as a pioneer in the history of one aspect of Australia's origins. With all its flaws, The Discovery of Australia is certainly a remarkable work for its time and especially for its place, far from the great centres of palaeocartographical research.


On offer is an original full set of 10 coloured lithograph maps that have been professionally matted on acid free white board, ready to frame. The matting sizes varying slightly but each is approx measures 28cms x 38cms, with the map sizes varying as per photos. All feature the facsimile signature of Collingridge in the bottom left hand corners. Apart from centre folds (Ex book) they are in great condition. Other copies of these maps are held by the likes of The Mitchell Library and other esteemed institutions.


Local Brisbane pick-up welcomed. Always happy to combine postage where possible & practical. HNCO are not responsible for import duties or customs charges. This is the buyers / importers responsibility.

$159
RARE 1894 Colonial British New Guinea Map of Tauwara or Milne BaySuper rare, unable to find another for sale or in any archives. 100% genuine & not reproduction. A Sketch Survey Map by R J...
Add to Basket
Add to Basket

$219
RARE 1896 Colonial British New Guinea Map. Mambare River & Kumusi ValleySuper rare, unable to find another for sale or in any archives. 100% genuine & not a reproduction. A Rough Sketch Map...
Add to Basket
Add to Basket

$169
RARE c1900 Colonial British New Guinea Large Map of The Morehead RiverSuper rare, unable to find another for sale or in any archives. 100% genuine & not reproduction. A Map of Skewing Part of the...
Add to Basket
Add to Basket