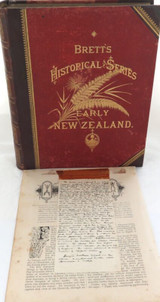 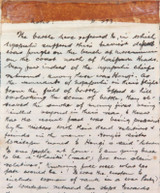 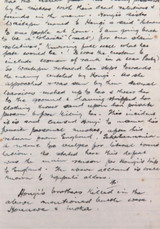 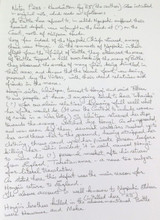 Firstly about H Brett, the Printer & Publisher of the book and the person who wrote the handwritten account of the Battle mentioned on page 292 of the book.

Brett was born on 25 February 1843 and educated at St. Leonards, Hastings, Sussex. After leaving school he worked in the establishment of an uncle who owned the Hastings and St. Leonards Gazette, together with a stationery business, and had some reputation as a local historian. Brett sang in a church choir from the age of 10, served in a volunteer corps, and was successful as an oarsman, winning the pair-oar championship of the South Coast. At 19 Brett was attracted by the prospectus of the Albertland Special Settlement in New Zealand, and signed an undertaking to buy 40 acres of land from the Auckland Provincial Council under an arrangement whereby he was to be employed three days a week on the settlement's newspaper. He left in the ship Hanover and reached Auckland on 12 September 1862.

Before going ashore he was offered work at £1 a day on the Southern Cross, a daily newspaper, and this ended all his visions of life on the land. He became a shipping reporter, and in 1865 transferred in that capacity to the New Zealand Herald. Before the days of cables, shipping coverage was of prime importance to New Zealand papers. There was the keenest competition in boarding inward-bound vessels and ransacking them for mails, newspapers, and all other sources of information about recent events in the outer world. Young Brett's experience of boat handling gave him an advantage, and he made a high reputation for enterprise and resource in his work. He had many adventures in bad weather by day and night, and twice narrowly escaped drowning.

After five years with the Herald he seized an opportunity to buy an interest in the Evening Star, later the Auckland Star, which had just been launched by G. M. Reed and a partner named Farrar. It was a sheet of four pages, each measuring 19 in. by 15 in. "For many years," Brett wrote at the Diamond Jubilee in 1920, "I shared in the mechanical production of the paper, setting type, folding and giving out papers to the runners, and for some months taking my spell in turning the handle of the machine, which in the early days had to be run by hand and occupied from three to four hours in working off two pages of a very small sheet."

On the departure of Reed in 1873, Brett became sole owner of the paper, and remained so until he took the editor, T. W. Leys, into partnership, forming an association which lasted nearly 40 years. He showed much enterprise in the journalistic management of the Star. During the mining boom he regularly used pigeons to carry important news from the Thames goldfield to Auckland, and even forestalled the modern photostat process by having election speeches in the Thames papers photographed on a reduced scale and sent away piecemeal by pigeon.

In nine years the Star reached a circulation of 6,000, and a rotary press was installed in 1887. A little later Brett set up one of the first photo-engraving plants in the colony, and in 1891 brought out the New Zealand Graphic, an illustrated weekly which appeared until 1913. He also founded the New Zealand Farmer and published Brett's Auckland Almanac from 1873 until well into the present century. After the Brett Printing and Publishing Co. was formed, he became managing director and held office until his death.

One of Brett's notable achievements was in the field of book publishing. In the 1880s he was moved to a serious attempt at meeting the need for local literature of a practical kind. In the face of many difficulties, including small supplies of type and barely adequate printing plant, he produced a number of large quarto volumes, including Brett's Colonist's Guide, of 1,200 pages, The Early History of New Zealand, Defenders of New Zealand, and The Life and Times of Sir George Grey. His South Pacific Pilot was a standard work for many years. These books were freely illustrated with woodcuts. All were of course hand set, and it was necessary to distribute the type for reuse after each sheet had been printed. Late in his life Brett published White Wings (two volumes), an invaluable work on early shipping, and a work of local history, The Albert-landers.

As a young man Brett served on the Auckland Harbour Board and City Council, and he was Mayor of Auckland in 1878. His main interests after his business was firmly established were music and gardening, but he found time for 40 years' work as a director of the United Press Association, which he had helped to establish. He was also president of the Mechanics' Institute, precursor of the Auckland Public Library. He was a generous patron of music in the city, helping societies with gifts of sheet music. He presented an organ to the Industrial and Mining Exhibition of 1898, and later had it installed in the Choral Hall and finally in the Institute for the Blind. In 1912 he provided a magnificent instrument costing £7,000 for the new Town Hall and secured the appointment of a city organist. He himself had a fine natural bass voice and sang in church and other choirs for fully 70 years.

At Takapuna, Auckland, Brett maintained one of the finest flower gardens in New Zealand, and gave much assistance and encouragement to horticultural societies and their members. A Liberal in politics, he consistently supported the Seddon and Ward Governments. He declined appointment to the Legislative Council and was three times offered a knighthood, finally accepting one a year before his death at Rotorua on 29 January 1927.

In 1864 at Auckland, Brett married Mary Moon, by whom he had two sons and three daughters. In 1928 his widow and family presented his Takapuna residence to the Anglican Church as a home for orphaned and needy children and as a memorial to him.

Brett was a man who in early life showed an unusual degree of practical enterprise within a limited field. His ambitions, however, appeared to be satisfied as soon as he found himself at the head of a prosperous newspaper business. He made little apparent effort to enter the wider field of finance and industry, but devoted himself mainly to advancing his two hobbies in the Auckland community. A kindly man of simple tastes, he nevertheless took his own line in most matters and was not easily diverted by attempts at persuasion. He can be summed up as one who carried over the virtues and limitations of the early colonists into a century which had left them some way behind.


On offer is the 1890 large hardcover book "Brett's Historical Series. Early New Zealand". Sold with the book is a handwritten account as told to Henry Brett of the Maori Battle mentioned on page 292 / 293. It is not known who conveyed the details of the battle to Brett or the date when it was recorded. His handwritten initials HB can be seen at the bottom. A brief segment of his notes reads

The battle here referred to, in which Ngapuhi suffered their heaviest defeat was fought on the beach at ????? on the coast, north of Kaipara Heads. Very few indeed of the Ngapuhi Chiefs returned, among those was Hongi. As the remnants of Ngapuhi in their flight from the field of battle, they observed the scene of battle atop a hill overlooking the scene of the battle, they observed the smoke of many fires being kindled in their areas and knew that the usual feast was being prepared by the victors, with their dead relatives and friends on the menu.


The book itself is complete & apart from foxing throughout is in excellent condition.

$259
This map was published in the 1859 book “Rambles in the Antipodes” by Edward Wilson. It depicts …. The South Eastern Portion of Australia and New...
Add to Basket
Add to Basket

$259
This map was published in the 1859 book “Rambles in the Antipodes” by Edward Wilson. It depicts …. The Overland Route to Australia and New Zealand...
Add to Basket
Add to Basket

$50
In used / played with condition, paint loss & wear, rollers rotate ok. 6.3cms long. Selling as is with no box, accessories or papers.
Add to Basket
Add to Basket