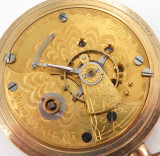 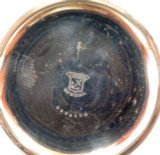 This is an incredibly scarce pocket watch, the combination of only 2,450 being made of this model in 1886 & the Joseph Jerger signed movement makes it super collectable !!!! 1886 Illinois, Grade 3-S, Model 2, 18S, 11J, key wind, lever set movement with date serial number 575295 for c1886. Currently not working, the movement is fully wound, won’t wind but when you rock the movement back & forth it runs like a “train / very strongly” then stops, will probably need a repair, the exterior of the movement is minty / very nice, balance staff / wheel are very good. Dial in stunning condition, glass very nice. NOTE the case back is not original & doesn’t screw down, it was originally taped down to protect the movement, its slightly larger than the original would have been. Sold without a key.

Jerger Jewelers is believed to be the oldest jewelry store in Georgia in continuous operation.

Founded in 1857 by Joseph Jerger, the venerable jewelry store has supplied Thomasville with every imaginable accessory, including musical instruments during its early years of business.

Joseph Jerger immigrated to Thomasville from Baden, Germany, in 1856, to live with his brother, Louis, who had settled in Thomasville years earlier. His fiancée arrived shortly afterward, they married in Savannah and returned to Thomasville to establish the store.

Six years after he opened his business, Joseph Jerger was drafted by the Confederate Army. He was wounded and captured during the Battle of Atlanta and served out the remainder of the War Between the States at a prison camp near Chicago.  Jerger returned to Thomasville and resumed business. In 1885, they built and moved into an adjacent Broad Street building still occupied today.

Although Jerger’s went bankrupt in 1897, Jerger’s son, Louis, acquired the business at a sheriff’s auction, allowing for a smooth transition and continuous service. Louis’s son, Joseph, managed the store after his father’s death in 1936, and his son, Joseph Jr., took over in 1971.

Jerger Jewelers is currently operated by the Faulk family of Thomasville.