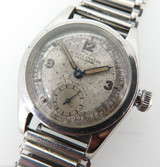 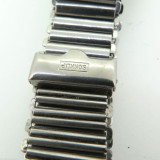 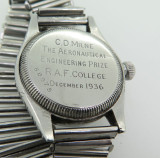 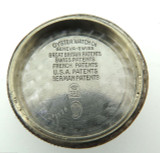 1936 ROLEX OYSTER IMPERIAL EXTRA PRECISION GNTS WATCH R.A.F ENGINEERING PRIZE. The original silver dial has luminous numbers, outer minute tracking and sub seconds, signed Rolex Oyster Imperial exra precision swiss made. The 30mm steel oyster case is signed in the back Oyster watch co geneva swiss SAR with patents and numbered on the back 68875. The original rolex crown screws down and is signed. The manual wound 17j movement is working but may need a service to keep time, fully signed Rolex extra prima timed 6 positions. Presents well complete with original Bonclip bracelet that has one link that needs repair. ENGRAVED TO BACK “C.D MILNE THE AERONAUTICAL ENGINEERING PRIZE R.A.F. COLLAGE DECEMBER 1936"
Please note this is a catalogued item and is no longer for sale.

It was, in fact, the white trail left by his Spitfire which led to Milne being shot down towards the end of April 1940. By that time the Germans were maintaining high-altitude patrols in order to intercept the photographic aircraft.

Six Messerschmitts approached under my ‘con-trail’ but I did not see them as I was busy photographing. The leader put a cannon shell into my engine which rapidly failed. While it lasted I tried to get back to France, suffering further attack on the way. Fifty miles from the frontier at a few thousand feet the engine gave out so I baled out between attacks after putting the Spitfire into a dive to destroy its equipment. Landed in a village and was immediately arrested.

Meanwhile the unit in France had been reinforced with a second Spitfire, and the two aircraft operated from different bases. Clark opened the second base at Nancy early in March 1940, and flew many sorties from there during the following months before the final evacuation from France. He was then given command of the flight inaugurated at St. Eval, in Cornwall, to cover Brest and the French ports; later in the year he returned to Heston to cover objectives in Germany.

Millen and Parker joined the flight at Heston in July 1940, and during the following months both men flew Spitfires on many sorties over enemy territory and the Channel ports, photographing the German preparations for the invasion of Britain. It was during a routine flight from Cap Gris Nez to the Scheldt early in September that Parker discovered one of the first concentrations of boats and barges in which the Germans intended to transport their invading forces across the Channel. The following month, when a new type of long-range Spitfire was introduced, Millen made the first operational flight in which the new aircraft was used and brought back an excellent collection of photographs. Details of his flight are thus recorded:

On the 29th October 1940, Flying Officer Millen left Heston in a new type long-range Spitfire, to carry out a high altitude photographic reconnaissance of Berlin. He found it covered with cloud so decided therefore to look for other targets. He succeeded in photographing Stettin, Swine- munde, Rostock and Warnemunde, and returned to Heston after a flight of five hours fifty-five minutes at 27,000 feet. This is the first operation on which this type of aircraft has been used, and Flying Officer Millen deserves great credit for his initiative in carrying on further into enemy territory, photographing what he knew were important targets, when he found Berlincovered with cloud. He has completed over thirty photographic operations in this Unit, all over enemy territory, in unarmed single-seater aircraft at high altitudes.

He won the DFC and survived the war, prior to being a pilot you went through all sections to prove yourself, that's why an engineering prize.

$4,990
A vintage Rolex oyster perpetual timepiece from 1954. It is a Mens 34mm Rolex with original black dial with matching hands that is guaranteed to impress. It is in pre owned condition, t
Add to Basket
Add to Basket