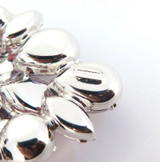 Eisenberg & Sons were one of the most highly regarded costume jewellery manufacturers, known for their use of crystals, rhinestones and coloured stones.  Eisenberg started out as a fine clothing company in 1914, often embellishing their designs with fine gem creative pieces.  Originally from Austria, Jonas Eisenberg insisted on using only the finest Austrian crystals in his designs.  The jewellery on the clothing was becoming more desirable than the clothing so the jewellery became available separately.  Once the focus became about the jewellery, the jewellery itself was selling so well the clothing lines were no longer designed or sold after 1958.
Eisenberg creations have become very collectable now, often recognisable by various marks on the pieces.  The words 'Eisenberg original' were used from approximately 1935 - 1945 and 'Eisenberg' or 'Eisenberg Ice' used around 1945 - 1950.  The copyrighted 'Eisenberg Ice ©' name came into effect from 1955.  The high quality craftsmanship and quality materials used have resulted in Eisenberg designs remaining as high end pieces, years after their original manufacture.  Often being passed down from generation to generation within families.
This original rhodium plated silver tone metal, vintage, coloured Austrian crystal and rhinestone encrusted brooch, is in good vintage condition and dates to around 1945 - 1950s.  There is just one small rhinestone missing, which is a shame but it could easily be replaced.  The colours are really beautiful, soft pink marquis and round crystals with pale amethyst tear drop shaped crystals. The brooch is quite a spectacle and very dramatic in design.  It is fully signed to the rear with 'Eisenberg' and the brooch pin is working well.  It would be a wonderful sophisticated treasure to add to your collection.  Please check out all the other pieces from a collection we have recently acquired.
Dimensions are as follows:
Height 6.3 cm x Length 4.6 cm x thickness 15 mm
Signed - Eisenberg
Pink and purple coloured Austrian crystals
Clear rhinestones
Reviews

$129
SUPERB / VINTAGE / LARGE REAL FEATHER HUNTING BROOCH. Ex deceased estate, originally from The UK, exact age unknown but family stated it was at least 100 years old, back has quite a bit of age about...
Add to Basket
Add to Basket