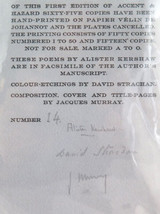 David Strachan (1919-1970), painter and printmaker, was educated at Geelong Grammar School and then studied art at the Slade School in London. After a period of travel in France and further study at the Académie de la Grand Chaumière, he returned to Australia, enrolling at George Bell's school in Melbourne before moving to Sydney in 1941. He exhibited landscapes, figurative works and still lifes and became one of the group of artists who travelled regularly to the abandoned New South Wales mining town of Hill End. After World War II, during which he worked as a camouflage painter at Bankstown aerodrome and performed minor roles with Hélène Kirsova's ballet company, Strachan returned to Europe, living in Paris and then London and studying at the CJ Jung-Institut in Zurich in the late 1950s. Back in Sydney from 1960, he bought a Paddington terrace house, spurring his close friend, Margaret Olley, to purchase a house nearby; she often painted at his home, and used it as a studio after he died. During the 1960s Strachan taught at East Sydney Technical College and exhibited regularly, winning the Wynne Prize in 1961 and 1964. In the mid-1960s, too, he was the executor of the estate of Godfrey Miller and became president of the Society of Artists. In 1966 the National Gallery of Victoria held a survey exhibition, Four Sydney Painters, showing works by Strachan, Donald Friend, Justin O'Brien and Jeffrey Smart. In late 1970, just as he was beginning to feel 'contemporary' and that his best work was still to come, Strachan died as the result of a car accident in Yass. Daniel Thomas curated the exhibition David Strachan 1919-1970 at the Art Gallery of New South Wales in 1973. Lou Klepac's David Strachan with an introduction by Barry Pearce and an essay by John McDonald accompanied a touring exhibition of Strachan's work in 1993. The National Portrait Gallery acquired Strachan's portrait of Kenneth Rowell through the intervention of Margaret Olley in 2002. The Tweed Regional Art Gallery and Margaret Olley Studio mounted the exhibition The mystery of things: Margaret Olley and David Strachan in 2016.


Ex the book "Accent & Hazard". Printed in Paris during 1951 by Jacques Murray at Stamur-Presse. Limited edition 14 / 50, sold with a photocopy of the original COA which is attached to the rear. It features the facsimilie signatures of the Author, Artist & Printer.


Local Brisbane pick-up welcomed. Always happy to combine postage where possible & practical. HNCO are not responsible for import duties or customs charges. This is the buyers / importers responsibility.