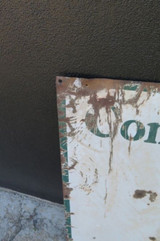 Imported from America, VERY HARD to get in Australia, particularly in this size. See photo for condition. Measures 1.02m wide x 71cms high.  Local pickup or buyer organises own freight. Located at Woolloongabba, Brisbane. Not available to overseas buyers.

By 1920 it is estimated that Marland and his partners controlled 10% of the worlds oil production (the equivalent of Saudi Arabia in 2006) and that Marland was worth $85 million. Marland oil changed it's name in 1929 when it purchased and merged with continental oil.

$5,999
VERY RARE American sign, virtually impossible to get in Australia in this size. Measures a massive 5.44m x 41cms high. Very nice condition for its age.  The Continental Oil and Transportation...
Add to Basket
Add to Basket