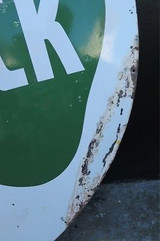 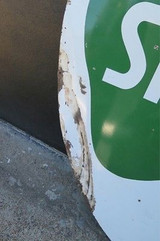 SUPER RARE 1949 MASSIVE 6FT AMERICAN SHAMROCK GAS COMPANY DOUBLE SIDED ENAMEL SIGN.
EXTREMELY RARE American sign, dated to bottom but hard to read, looks like 49, VERY hard to get in Australia, in good original condition, see photo's for condition. 183cms in diameter.
The Shamrock Oil and Gas Company, was founded on August 9, 1929, by John Sheerin, who named the company for a symbol of his native Ireland. The company was headquartered in Amarillo and financed by the Fownes family of Pennsylvania. In its early years Shamrock Oil and Gas lost some $9 million. Its first refinery was built in 1933 at Sunray, in Moore County, Texas, and that same year the company opened its first gas station, also at Sunray. In 1938 James Harold Dunn, a young engineer at the Lone Star Gas Corporation, joined Shamrock Oil and Gas as vice president and general manager, and the next year the company made its first small profit. In 1939–40 Shamrock and the Lone Star Gas Corporation jointly built a plant at Murchison in Henderson County to recycle natural gas. By 1941 there were 162 Shamrock service stations in the southwestern states. During the mid-1940s Shamrock became a major producer of natural gas.
Reviews