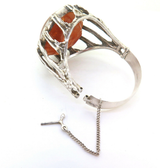 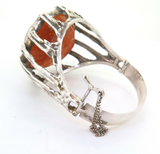 Amazing handmade hinged .800 silver bracelet featuring a gorgeous piece of amber. The amber is such a beautiful chunk of natural amber, with a domed polished side and the underside showing the amber in its natural state. Half of the face of the amber is a transparent honey colour and the other half displays swirls of luscious butterscotch amber. You can see crazing to the bottom of the amber that is magnified through the clear amber. This happens naturally, when amber is exposed to high temperatures and probably happened in the years since the bracelet has been in Australia. It actually looks pretty amazing and is only superficial to the bottom surface of the amber.
The construction of the silver setting around the amber is really well made and creates a cage like look that is almost prehistoric. This is further emphasised with the addition of the hinge pin formed like a little bone, almost as though the amber bracelet is celebrating millions of years ago when dinosaurs roamed the earth.
The bracelet is stamped to the rear with a partial makers stamp B?, unfortunately, the maker cannot be deciphered or found. The Minerva stamp facing right and the ladies face in a circle stamp, indicates the time period of manufacture was between 1963 - 1986, the number 3. for .800 silver and W for the city of Warszawa. This bracelet is part of a vintage collection purchased from one owner who acquired the pieces from 1963 - 1970's in Poland. It is in great condition and is ready to wear. Definitely a statement piece that will be a talking point at any event. What a piece.
Dimensions are as follows:
Height of amber 4.5 cm x width 6 cm x depth 3 cm
Size would fit a medium - large size wrist
Will accomodate a wrist of 16 -16.5 up to 19 cm max
Weight 77.64 grams
A Little History of Polish Amber
Polish amber Jewellery had a major resurgence from the 1960s onwards. Though historically, the oldest traces of amber workshops on Polish soil date back to over 6000 years ago. Examples of which were found in the Niedźwiedziówka settlement, near the coastal city of Gdańsk. Ambers origins were a mystery at that time and could only be explained with a myth.This myth became a popular Polish legend that the amber nuggets found washed up on the beaches were actually debris from the sea goddess Jurata's underwater palace. Her residence had been destroyed, in a fit of jealously by a mighty god called Perkin, who was infuriated by her relationship with a fisherman. She dared  to fall in love with a mortal and he sent a lightning bolt from the sky, sadly killing her and shattering her amber palace into pieces.
from Lucjan Siemieński, Polish, Ruthenian & Lithuanian Legends and Tales, 1845
It is more widely known about the origins of amber today, that before it washed up on the shores of the Black Sea, it originated from a coniferous tree called 'Araucarias of the genus Agathis' in what we now call Scandinavia. These trees were prolific producers of liquid gold tree sap that fossilised into precious amber over 400 million years. The trees produced the sap to protect from boring insects and heal injuries. The name Amber is essentially restricted to fossil resin of Baltic provenance.
Reviews

$499
Stunning high dome butterscotch amber bullet ring set into intriguing .800 silver setting. The sculptural ring is reminiscent of a cathedral spire and is also very organic looking. The amber is...
Add to Basket
Add to Basket

$800
Stunning highly decorative clear honey tone amber with amazing swirls of butterscotch, like a tiger pattern. The setting around the ring, is very intriguing with an open frame and circles of .800...
Add to Basket
Add to Basket