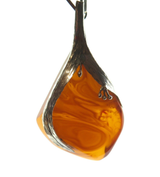 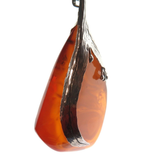 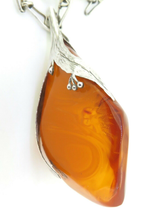 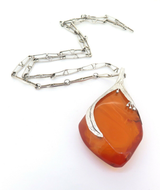 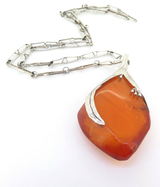 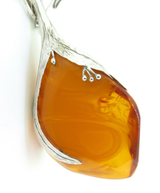 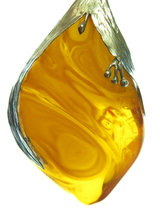 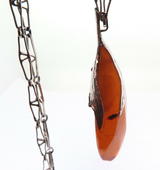 Extremely beautiful artisan made naturalistic style necklace featuring a delightful natural amber piece, that has amazing swirls of opaque butterscotch amber mixed in with clear amber and a small inclusion to the side. The inclusion looks like some kind of organic material. The rich cognac honey tone is so warm and the amber is naturally shaped. The setting is an elongated leaf design with little buds that frames the amber perfectly. The handmade chain has been painstakingly crafted with an unusual lozenge shaped link in a repeating pattern.
The pendant is stamped on the middle section of the link nearest the clasp. It is faint but the face of Minerva is facing to the right with a number 3 for .800 silver. Another link is also stamped with the makers initials N.O. This stunning piece is from a collection recently acquired and was purchased in Poland.
Dimensions are as follows:
Height of pendant 8 cm x width 2.6 cm x thickness 11 mm
Length of chain 57 cm
Weight 35.15 grams
A Little History of Polish Amber
Polish amber Jewellery had a major resurgence from the 1960s onwards. Though historically, the oldest traces of amber workshops on Polish soil date back to over 6000 years ago. Examples of which were found in the Niedźwiedziówka settlement, near the coastal city of Gdańsk. Ambers origins were a mystery at that time and could only be explained with a myth.
This myth became a popular Polish legend that the amber nuggets found washed up on the beaches were actually debris from the sea goddess Jurata's underwater palace. Her residence had been destroyed, in a fit of jealously by a mighty god called Perkin, who was infuriated by her relationship with a fisherman. She dared  to fall in love with a mortal and he sent a lightning bolt from the sky, sadly killing her and shattering her amber palace into pieces.
from Lucjan Siemieński, Polish, Ruthenian & Lithuanian Legends and Tales, 1845
It is more widely known about the origins of amber today, that before it washed up on the shores of the Black Sea, it originated from a coniferous tree called 'Araucarias of the genus Agathis' in what we now call Scandinavia. These trees were prolific producers of liquid gold tree sap that fossilised into precious amber over 400 million years. The trees produced the sap to protect from boring insects and heal injuries. The name Amber is essentially restricted to fossil resin of Baltic provenance.
Reviews

$499
Stunning high dome butterscotch amber bullet ring set into intriguing .800 silver setting. The sculptural ring is reminiscent of a cathedral spire and is also very organic looking. The amber is...
Add to Basket
Add to Basket

$800
Stunning highly decorative clear honey tone amber with amazing swirls of butterscotch, like a tiger pattern. The setting around the ring, is very intriguing with an open frame and circles of .800...
Add to Basket
Add to Basket